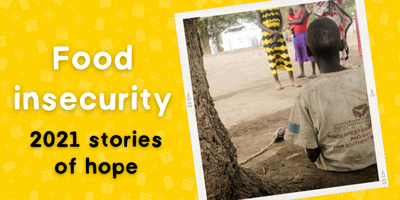 Across Uganda and South Sudan over 22 million people are affected by food insecurity and malnutrition each year. Extreme chronic hunger brought on by severe poverty will mean these people are likely to go days without eating.

When HHA's CEO, Carwyn Hill, visited Uganda in February 2017 he met a boy with special needs called Modi who was tied to a tree in one of Uganda's refugee settlements. Modi’s mother had no option but to tie him up as she’d previously lost him in the refugee settlement when he went looking for food. Modi was malnourished, lying on the dusty floor, lifeless and with sores on his body.

HHA started providing support for the family and he soon joined the Plumpy’Nut programme. Plumpy’Nut is a ready to use therapeutic food for children and can treat a child with severe and acute malnutrition in just 6-10 weeks. Modi received a course of Plumpy'Nut to treat his malnutrition and his life has been transformed. He is no longer tied to a tree and now enjoys playing football with other children in his community. HHA's CBR team continues to support this family and many others around BidiBidi camp.